On Friday, 28 July 2017, the Museum Foundation held its quarterly board meeting at the museum.  Among the business discussed were several highlights.  First, during MG (R) Pat Sculley’s Capital Campaign update, was the announcement that we have received a $250,000 donation to the Capital Campaign from the Linn Foundation.  We expect that this magnanimous gift will open the door with other large Foundations to consider similar gifts to our campaign.  MG Sculley reported a steady stream of additional donations which continue to enhance the campaign coffers.

Second was an update on the Foundation’s support for the 2017 Best Warrior breakfast and award ceremony earlier in the week. See separate BLOG for details. Finally, the Museum Director, George Wunderlich, announced the procurement of $500,000 to $750,000 worth of high quality Museum grade artifact cases, video, and other display equipment from another Museum.  This acquisition was made possible by the quick financial support of the Museum Foundation to pay for the pick-up and movement of the equipment to the Museum’s warehouses.  This very needed and timely acquisition will help offset expenses we had planned under the Capital Campaign to upgrade Museum exhibits.

As a special treat, Board Members attending the meeting were shown the recently acquired Surgeon’s kit from the battle of the Little Big Horn.  Army Surgeon Lord was killed at the Battle but his Army Issued Surgeon’s Kit was recovered the next day from a local Indian village.  The next quarterly Board Meeting will be Friday, 27 October at the Museum.  All are welcome to attend. 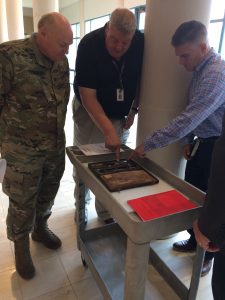 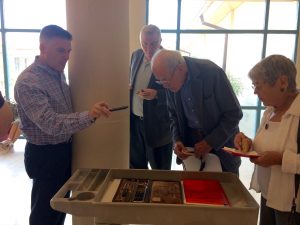 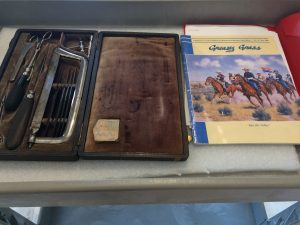